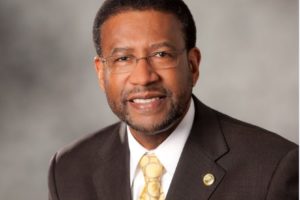 Dr. Ronald Carter is a native of High Point, NC and has served as the 13th president of Johnson C. Smith University in Charlotte, NC since 2008. Dr. Carter became aware of breast cancer as a student in sixth grade when his teacher, Mrs. Simmons, was diagnosed. Since that time, Dr. Carter has been putting forth his best efforts to support those in need and help in overcoming adversities. For Dr. Carter, being a Pink Tie Guy means not being afraid to talk about breast cancer and being there for the people who have to deal with the disease. “It allows me to be an ambassador and to really get out and talk to other people about the need for their support.”

He is committed to understanding who we are as global citizens and making a difference as a community. By embracing diversity and inclusiveness, he believes we can learn the qualities that attract people to a cause and use their engagement as a catalyst for our greater well being.