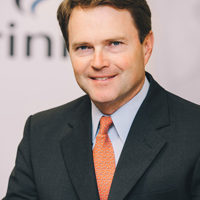 Alan grew up in the Charlotte area and attended East Mecklenburg High School. He graduated from the University of South Carolina with a degree in Insurance and Economics in 1986. While working as a group representative for Jefferson Pilot, he developed a keen insight into how insurance companies operate and the internal workings of paying claims as well as the internal structure of a large insurance company.

Alan began his brokerage career with Knauff Insurance in 1989, and has spent 25 years working in and around the employee benefits area. Alan was designated as a CIC in 1991. He has served on the advisory Council for American United Life, Crum & Forster, Aetna, Great West and EBS. He now serves as Managing Director of Corporate Services at NFP.

Alan has been actively engaged in the Charlotte community for many years. He has served on the boards of many organizations including WRCM, Young Life, Sports Outreach and Jackson Park. Alan also serves on the Charlotte Leadership Forum advisory council. Alan and his wife have been blessed with four children.

⇐ Good News: Breast Screening doesn’t have to be Complicated!
A Second Opinion from a Team You Can Trust ⇒
Go to Top