You are here: Home » ‘What do we do now?’ A mom takes on breast cancer…with attitude

‘What do we do now?’ A mom takes on breast cancer…with attitude 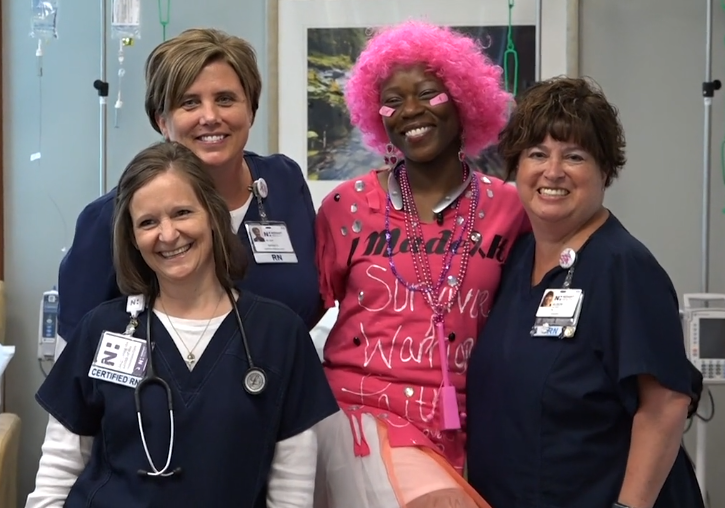 Toniy Shears was giving her 6-year-old son, Riley, a bath one evening when she noticed the tiny bump on her chest.

“My arm rubbed across a pea-sized knot under my left breast,” Shears, 46, said. “It baffled me for a minute, but I didn’t want to jump to conclusions.”

She had a lot going on at the time.

It was the fall of 2017 and she was just 8 weeks from graduating from her training to become a medical assistant. She was a single mom and also worked full time at Novant Health Presbyterian Medical Center as a patient access specialist. She welcomes, registers and assists patients in the emergency room.

“I actually forgot about the knot for a couple of weeks,” Shear said. “But then I felt it again and began to worry. It was so small, but I followed my gut and went to get it checked out.”

She went to see her doctor and explained the knot had not been present at her mammogram the year before. He recommended a new mammogram.

“All the while I’m still in school and about to hit midterms,” Shears said. “I was stressed and didn’t know what to do.”

Shears’ sister is a breast cancer survivor and knew what to expect, so she accompanied Shears to her mammogram.

The radiologist told Shears there was an area in her breast that caused concern and recommended a biopsy.

“When they said biopsy, I didn’t hear anything else. Everything went blank,” Shears said. “I had studied all of this in school but never thought I’d have to deal with it in real life. I’m so glad my sister was with me because she had to update me on what the radiologist said after the appointment.”

When Shears’ biopsy was scheduled for the same day as her midterm, she knew she had a choice to make.

“That’s when I knew I needed to take a leave of absence from school,” Shears said. “I knew I wouldn’t be able to study. I needed to focus on my health. I could get my degree anytime.”

With the stress of school gone, Shears said she would be OK with whatever happened. She proceeded with the biopsy and was subsequently diagnosed with breast cancer.

“I couldn’t believe this was happening to me eight weeks before I graduated,” Shears said. “But my first response to my doctors after being diagnosed was, ‘OK! What do we do now?’”

Instantly, Shears was ready to fight. She said the doctors were a little thrown off by her positive reaction.

“I knew I was going to have to face this head-on,” Shears said. “I didn’t have time to be upset. I told my family ‘This is not a pity party, it’s a praying party.’”

Since Shears’ sister had breast cancer previously, it would make sense that her cancer would be hereditary. But she tested negative for the BRCA gene.

Other risk factors include being younger – it’s more likely to occur before age 40 or 50 – and being African-American or Hispanic. Shears fell into both of those categories.

Because of her diagnosis, Shears had fewer treatment options. Triple negative means that the cancer doesn’t have any of the receptors that are commonly found in breast cancer, like estrogen or progesterone. That means it can be harder to treat because these receptors allow cancer to be treated by hormone therapy or other drugs, according to the Centers for Disease Control and Prevention.

Shears proceeded with a lumpectomy to have the knot removed. Her results from the lumpectomy led her to get a mastectomy.

“The knot was where it was because the cancer had spread outside of my breast,” Shears said. “The knot was only 1.5 centimeters – I wasn’t even supposed to find it. I just think about how much worse it could have been if I hadn’t found it early.”

As part of her treatment plan, Shears completed 16 chemotherapy treatments and has worked hard to improve her overall health by changing her eating habits.

“Toniy came in with a fighting attitude,” Lassiter said. “We took it week by week and she was very resilient.”

Making the best out of a situation

Shears completed her treatment in July and is heading back to class. She’ll graduate in December.

“I’m excited and nervous at the same time,” Shears said. “It’s a lot of mental preparation to go back and pick up where I left off.”

But Shears said this part of her journey has given her some clarity.

“I kept asking God for a specialty,” Shears said. “It’s going to be oncology. I knew I had to make the best out of my situation.”

She hopes to transition to a medical assistant position within Novant Health upon graduation.

“My goal is to help even just one patient,” Shears said. “I can let them know I have been through the same thing and while the journey is not easy, you can surround yourself with positive people and face it head-on.”

You don’t have to face your breast cancer diagnosis alone. The breast cancer specialists at Novant Health are close by and here to provide you with information, support and the help you need.